You are here: Home / All posts tagged Budapest Christmas 2013
10 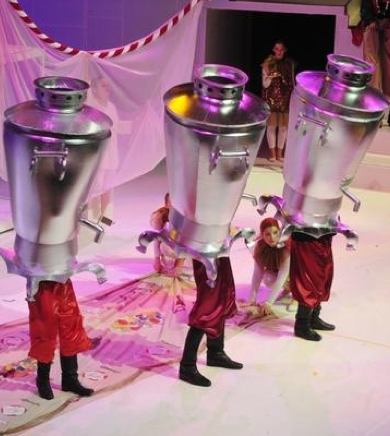 Nutcracker is one of the most awaited shows every year in Budapest, whether you wish to see the classical ballet of Nutcracker story in the Hungarian Opera House and National Ballet Institute (the Opera House is home of both the operas and ballets), or the more contemporary ballet and theatre shows in the Palace of Arts in Budapest (MUPA for short). 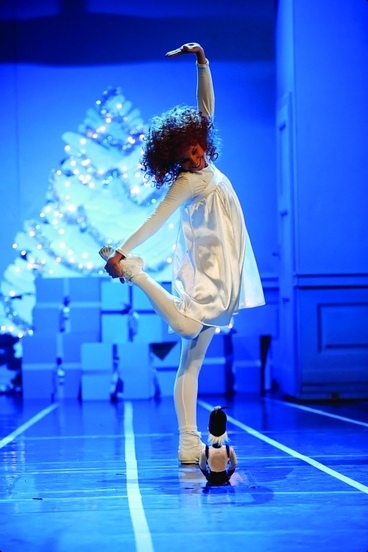 The Palace of Arts invites various companies to put up an annual Nutcracker Show, or stages an in house production. In recent years Budapest MUPA has presented a vast array of Nutcracker performances, e.g.  the renowned ballet company of Szeged town in Hungary visited MUPA to perform the ballet in a modern interpretation.

Tickets for Nutcracker shows are on purchase from about September / October onwards. Please check the upcoming shows for December on the official website of MUPA on Mupa.hu.

Every year around Christmas time in Budapest there is a charming, festive Gingerbread City built Read more

Things to do in Budapest on 29 December

Spending 29 December in Budapest can easily be fun with many interesting things to do. Read more

Looking for things to do once Christmas is out of the way? Not sure what Read more
16

In 2014 there will be several bath parties in Budapest in two of the outstanding thermal baths of the city. The must go NYE party is definitely the NYE Sparty in Szechenyi Baths 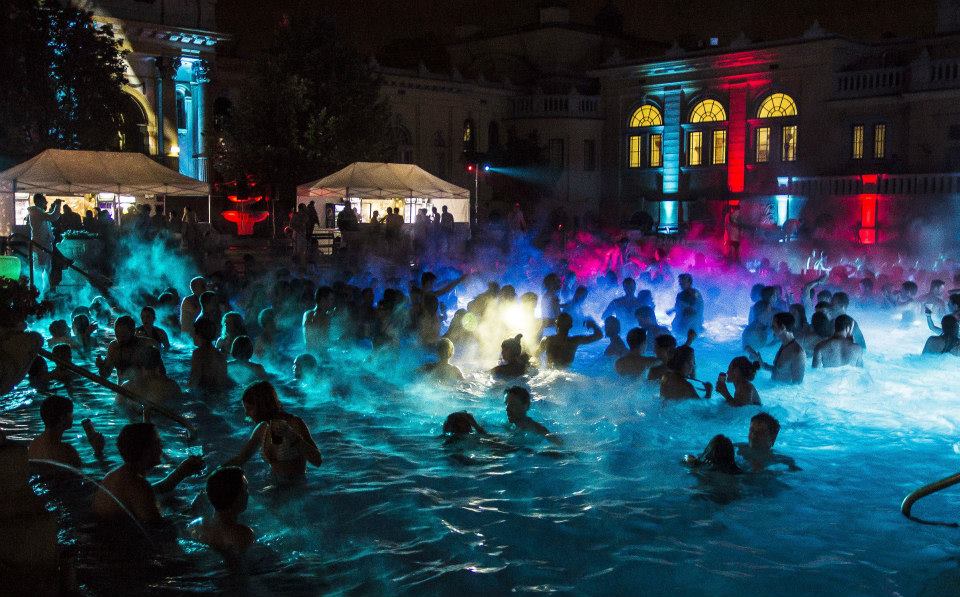 December 30, is the day of the much awaited pre New Year’s Eve party, now you can be part of one of the biggest Cinetrip bath party in Budapest winter season.

The pre New Year Party in Szechenyi Baths will rock the nightlife of Budapest with people party under the steam clouds and in the hot spring waters. Laser rays will zigzag and paint the walls with astonishing colours. Having doubts about the cold in winter time? The water is warm! :)

Other December bath party venues are not in Szechenyi Baths. Instead the venue is the smaller and more cozy Lukacs Baths.

Booking Tickets for the Winter Bath Party in Budapest: learn about the details, prices, location, FAQ

You could get easily warmed up for Budapest New Year’s Eve with a great party / sparty. Don’t forget your pair of flip flops, a nice and warm beach towel (you can also buy a Sparty towel on the spot though). 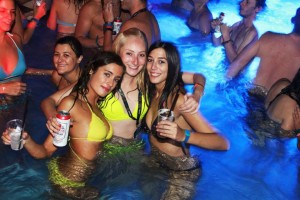 Booking online in advance is recommended. Every online ticket includes a locker with a lock. Bonus tickets come with a tiny little changing room called cabin, which you can use for your privacy and lock / unlock with your high tech electronic wrist band.

Cinetrip was 15 years old and its Cinetrip birthday party is at Szechenyi Baths in 2012.

Have fun in Budapest!

On December 30, 2018, you can be part of one of the biggest Cinetrip bath parties in Budapest, the pre New Year’s Eve pool sparty in Szechenyi Baths. 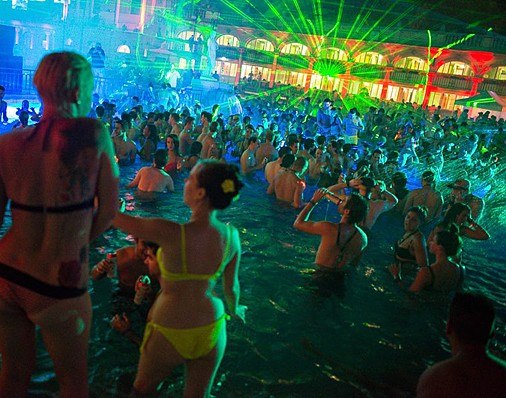 You could get easily warmed up for Budapest New Year’s Eve with a great party / sparty. Don’t forget your flip flops, and a thick towel big enough to cover you well (there are a few meters between the pool and the building to run). :)

Buying tickets for the New Year Party
Bonus tickets include Sparty towels, and some drinks too.

Cinetrip is over 15 years old and its parties are absolutely stunning. More and more young people take a party weekend break in Budapest just to be part of this special experience.

Cinetrip parties have been in many Budapest baths and in other venues too.

There are two Cinetrip parties in Budapest every year, one in summer (August) and one in winter (December).

The founding father is Laszlo Laki.

Winter time? The water is warm! :)

Have fun in Budapest!

The Budapest Basilica Christmas Market only launched in 2011, but in 2012 the fantastic Advent fair and Christmas market is making a spectacular return in 2012. The fair is not to be missed, and it is conveniently located in the city center!

You don’t have to be a gift hunter for traditional Hungarian Christmas gifts to fully enjoy the wonderful Christmas market atmosphere right in front of the biggest cathedral of Budapest, the 96 meter tall St Stephen’s Basilica.

Similarly to the displays on the nearby –  and more famous – Budapest Christmas Market on Vorosmarty Square, the items for sale are beautiful handcrafted, high quality goods, which can make a perfect souvenir or special Christmas gifts for your loved ones.

Budapest Christmas Market 2012 by the Basilica 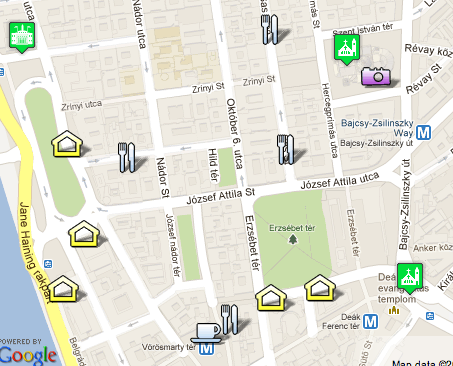 Light Ray Painting on the Basilica in Budapest

at half past 5 from Monday to Sunday, every day (exceptions below!) festive lights are projected on the walls of the St Istvan Basilica with accompanying melodies. Be there on the Christmas market at 5:30 and enjoy the Christmas sights.

There will be no light painting on the following days (when the market is temporarily closed for the Christmas holidays):

December 15., Saturday, 11:00 am:
Dóra Havas – Home made Christmas candies and other sweets

Shows and Performances at the Basilica Christmas Fair 2012 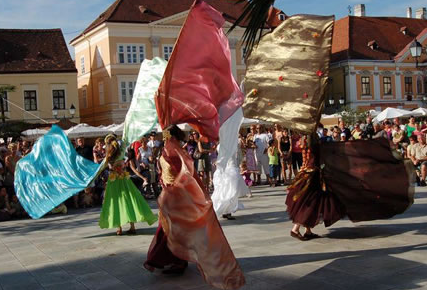 Birds at the Basilica Xmas market in Budapest

Flags or Birds? What are these flying dancers with poles and huge sheets of silky sheets? A special performance at the Budapest Basilica Christmas show is the “angel dance” of Middle-East origin. It has great traditions in many European countries too, but it is new to Hungary. The dancers have huge wings on sticks and with the colorful swirling of them they can tell you beautiful stories. They put you in a special mood merging components of classical ballet and that of belly dance. The impact is similar to the show of “flag throwers”.

Children and adults can test their reflexes, adroitness, endurance and balancing skills. Many juggler tools are presented to the visitors like simple balls, maces, poi, devil’s stick, long stick, yo-yo, diablo or contact ball. These tools, exercises and techniques can develop the general movement coordination, sense of balance and physical condition not even to mention the joy of playing and experience of success.

Skate Rink by the Budapest Basilica 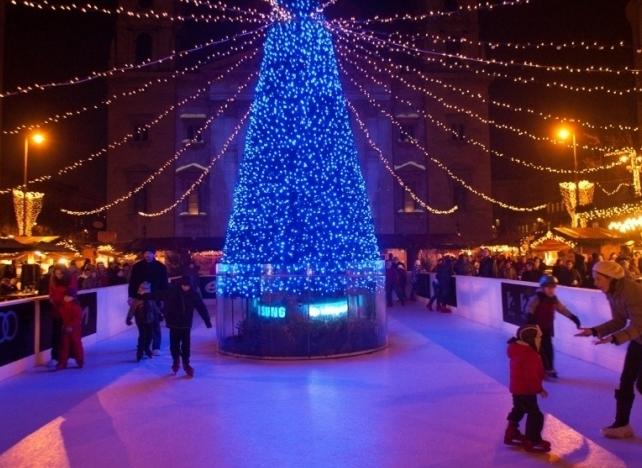 Skating rink in the heart of the city? In front of the Cathedral? On a Christmas fair? You are right. Budapest is a unique place with unique ideas. And why not? On weekends from Friday to Sunday children under 14 years old can skate free of charge.

Trainers will help and teach your little ones how to skate.

No skates with you? You can rent them on the spot (rental fee is charged).

Is it an ice rink? Sort of artificial ice rink? Yes and no. The skating rink resembles the ice rinks, but is made of a special plastic (the SummericeTM is a US made plastic skate surface that does not need cooling)

Santa Clause painted with ray lights on the walls of the St Stephen’s Cathedral, Budapest:

Society of Respect presents active elderly at the Christmas market in Budapest at the St Stephen Basilica. After all, 2012 is the year of “active aging” and the solidarity among generations in Europe. In this spirit Hungarian pensioners over the age of 60 show us how it is possible to live an active life in an elderly age. Please donate: the incoming donations are forwarded to Árpád Ódry Home of Artists that helps elder people. 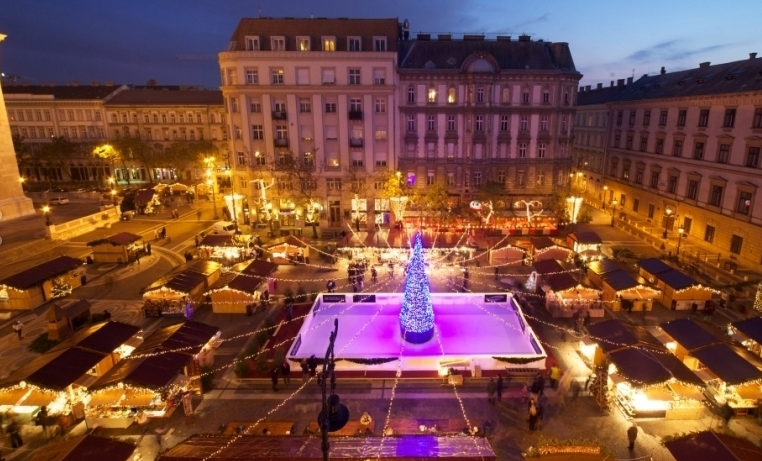 Also the children can enjoy an unequalled experience in the wooden hut of Society of Respect after 5 pm every day because they can encounter with Santa Claus personally!

Budapest is a multicultural city with many thousands of Jewish residents who will celebrate Hanukkah in Budapest. Don’t be surprised that you can also try Raj Rachel’s gorgeous Flodni at the Advent Market. Do try this rich Jewish cake at the market. And give Palinka a chance to heat you up a bit, a tiny bit on the chilly days. The best fruit palinkas will be sold at the market, so here is a chance to test the Hungarian spirit (carefully, its alcohol content is very high).

The 2013 Budapest Christmas market dates have not been finalized yet, but will be around the same time as the fair in 2012 (from Nov 30 to Jan 1)

Hungarian Folk Shows are a mixture of folk dances and folk music. Lively shows to make your Budapest Christmas break more festive, though the dance choreographies themselves are not especially Christmassy (they are folk shows of traditional dances, beautiful clothes and nice music). 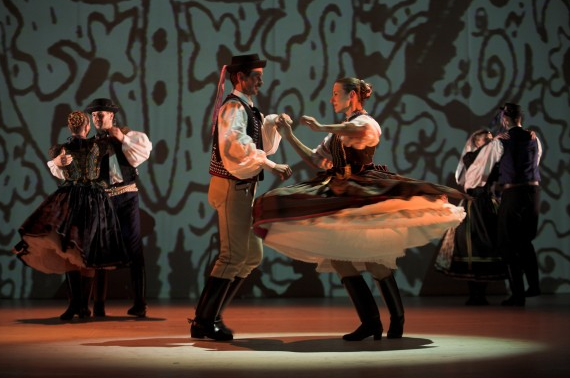 It makes a nice Christmas gift for the whole family as the programs appeal to all ages.

Hungarian Folk Show tickets can be combined with a Christmassy cruise on the river Danube: Budapest Folk Show + Christmas Dinner cruise or Budapest Evening Cruise with 2 Drinks (we think it is a good deal for Dec 26):