Budapest Christmas Eve Concerts are not numerous compared to the rest of the December events when you can choose from dozens of good and affordable concerts.

As most Hungarians tend to spend the evening with their families, there are a lot fewer people going out in Budapest, so the available concerts and events are few and far between.

Basically, what we know about on offer in for Christmas Eve as concerts in the various genres are the following:

Christmas Eve Concert in the Inner City St Anna Church Budapest – St Anna Church is a fascinating Neo-renaissance Church with Baroque Elements (18th century). The church is the home of elevating music concerts throughout the year. Note: there are more St Anna churches in Budapest, the venue is the Inner City St Anne’s Church on Szervita Sq District V. Please check availability before attending the concert. Booking tickets online on this page. 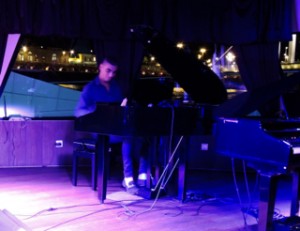 Live bar piano music will provide the background ambient of the Christmas Eve Piano Cruise in Budapest on a 3 hour festive cruise. The bar piano music will be also accompanied with songs of international greatest hits (Girl from Ipanema, etc.) and local songs. The duo at the pianos will compete with each other, and take turns in championing the stage. Tables for couples, families, or friends are separated, offering privacy.

Gypsy and Salon Music Concert in Budapest on Christmas Eve 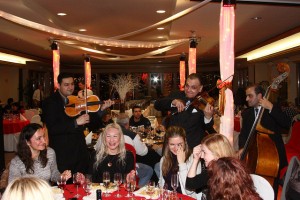 As part of the Christmas Eve night river cruise with buffet dinner, you can listen to a live concert played by the popular Hungarian Gypsy Trio on the Budapest Christmas Eve Cruise with Gypsy Music. The cruise goes twice in the evening of December 24. Tables are shared round tables of 10, offering a night of getting to know other guests.

Music of the Midnight Masses in Budapest

Participate in the Midnight Mass in Budapest in St Stephen’s Basilica or Matthias Church. True, it is not a concert event, but Christmas music will fill the century old halls of the churches, and the hearts of the participants.

In 2015 we have not been informed about upcoming concert on Dec 24, but there may be an alternative music concert in Mika Tivadar club, or in another ruin pub of Budapest.