The Santa Claus Train is a lovely nostalgia train up in the Buda Hills run by the Hungarian Children’s Railway in early December. The Children’s Railway was by the way the former Hungarian Pioneer Railway, which was a huge success during Communism, and managed to survive the change of regime, an absolute family favorite! Now, if you wonder why the Santa Claus comes so early in Hungary, at the beginning of December, rather than as Father Christmas should, at Christmas, the fact is that in Hungary, Santa Claus has a special day, Dec 6 (St Nikolaus’s day), while the Christmas presents in Hungary are brought by the Baby Jesus (or the Little Angel). Don’t ask how kids believe that a baby should be so strong. They do. 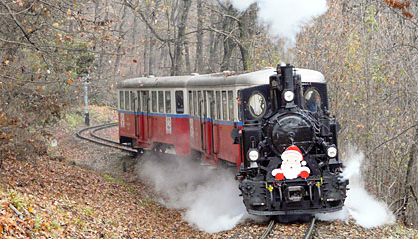 Hours of Departure of the Santa Claus trains:

On Saturday, 1st December and Sunday, 2nd December 2018 you can ride the Children’s Railway in the company of Santa Claus again. This is the Advent period, and you can feel that this event for children and parents will be worth every minute.
Tickets can only be purchased in advance!
Santa Claus Specials are going to be operated on both days of the first weekend of December where children and parents can ride the Children’s Railway with Santa Claus and his bogeymen.

The young passengers and Santa’s helpers will be expecting the arrival of Santa Claus together. They will spend the time with signing and reciting poetry until he shows up on the train.

Santa Claus is going to chat away with every child individually before presenting them with the traditional small bag of sweets and fruits.

Some of Santa Claus’s helpers are going to entertain the children in Huvosvolgy just outside the station with dancing and singing before the departure or after the arrival of the special service.

I am contacting you in regards to The Santa Cause, and was hoping you would get involved. This campaign’s goal is to help turn the image of Santa into a better tool for charity. The image belongs to the people, and if used properly, could generate extra money for the sick and needy globally.

I saw information regarding The Santa Speedo run, and this is something I think is great ( I would also love to participate, but thats another discussion) We want to help turn Santa into a healthier image, and have him fit the needs of society. I don’t know anyone in Hungary to present this idea to, and was hoping I can share with you information that could help increase money to the needy in your country.