You are here: Home / All posts tagged Budapest Christmas 2009
16

In addition to the many fantastic Christmas events in Budapest, scheduled and published, there are many little things going on in the city, along with its more well known Budapest Christmas sights, which go unpublished or in stealth mode, like sudden fun flashmobs, street buskers performing festive street music in December. Here are some random examples of random things in Budapest Christmas:

Budapest is an ever changing city, so we are quite happy to share that the city has now multiple skating rinks (besides the best outdoor Budapest ice rink in Hungary in the City Park of Budapest. Take a look at the skating rink near Nyugati Train Station on Eiffel Square

Adam Takacs (Takács Ádám) and his folk band playing live at the Christmas market of Budapest on Vorosmarty Square in 2009. One of the dozens of folk bands who played on the Xmas fair, warming up the cold feet at the traditional market in cold December. 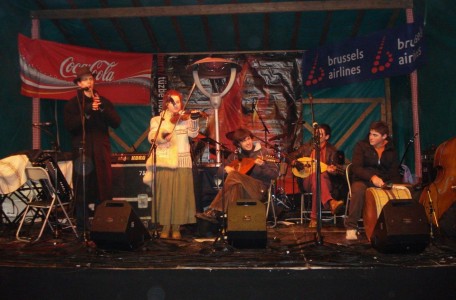 This concert video was recorded in 2009.

Bara Folk Band is one of the hundreds of Hungarian folk bands who have shown their talents at the biggest Budapest Christmas market, the Vorosmarty Square Christmas Market established in 1998. Their music is traditional, from Vajdaszentivany.

Zagyva Hungarian Folk Band at the Vorosmarty ter Budapest Christmas Market performing for the market visitors in the cold December weather in 2009. People often dance spontaneously, especially with children in the markets for the live music.
This music is from the Galga river area in Hungary.

Zagyva Band is from Tura, Hungary. Line up of Zagyva Folk Band
Vera Liska vocal, Gellert Boda on the violin, Daniel Mucsinyi on the clarinet, Sebestyen Tóth on the hammered dulcimer (cimbalom), Andras Szabó on the viola, Marton Boda on the doublebass.